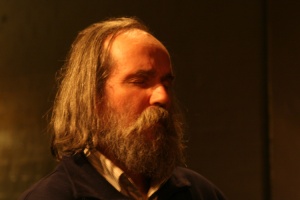 Ukrainian pianist/composer Lubomyr Melnyk was born in Berlin in 1948 to Ukrainian parents who made their home in Canada in the early 1950s. He performed and recorded most prolifically from the mid-1970s to late 1980s, and now-from his own comments at Oto-is somewhat isolated in his Canadian home. This one-off London concert was, incredibly, his first in the UK.

Melnyk has developed a style he calls ‘continuous music’, a form of rich minimalism (akin, perhaps, to Terry Riley) which is characterised by a constant note-flow of extreme rapidity. He subjects repeated arpeggios with plenty of sustain to harmonic changes that produce a rich blend of overtones and consonant or dissonant resonances. The speed with which he combines notes (he is reportedly the fastest pianist in the world, sustaining speeds of over 19.5 notes per second in each hand[1]) is dazzling, but the effect is richly melodic, albeit rather sombre.

(Just before the concert, Melnyk recorded a brief interview with Radio 4 Today Programme arts correspondent David Sillito, in which Sillito quizzed Melnyk about the need for speed. You can hear it here.)

At Oto, Melnyk played three compositions. The first was a rhapsodic, lyrical layering of tight-knit groups of sounds that flowed; commingling eddies in one long, unbroken course. The second, titled “House of a Thousand Shutters”, was relatively dissonant at first, but attained clarity through nuanced layering, until ultimately it was possible, as Melnyk had said he intended, for us to “recognise the light within the beauty”.

Melnyk introduced each piece with just such touchingly humble passion, making clear his total immersion in his concept. He is evidently a man with a deeply spiritual outlook on life, and the acoustics and atmospheric peculiarities of the venue and the unique characteristics of the piano all inform the quality of his performance.

On the third and final piece, “The Fountain”, Melnyk played to his own accompaniment. Just hours earlier he had played and recorded one part on the same piano: now that recording was played back and overlaid with his live performance. In his spoken introduction, Melnyk planted the suggestion of birds in flight, and as arpeggio layered upon arpeggio and the Oto piano thrummed from an accrual of resonances—“The overtones are really sensitive,” Melnyk said: “You’ve got to hear the voice of the piano itself”—it was indeed hard not to visualize birds teeming, wheeling, flocking against a cerulean sky.