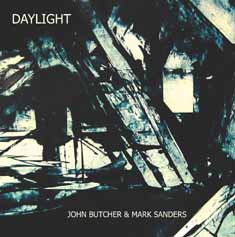 The following are my liner notes for John Butcher and Mark Sanders’ Daylight (Emanem 5024), which was recorded at the 2011 Freedom of the City Festival in London, and at Southampton’s Turner Sims, in February 2011.

Although both Mark Sanders and John Butcher spent their teenage years in the London suburb of Petts Wood, they didn’t meet each other until the mid 80s. Their first musical encounter was at the home of Derek Bailey, and they have crossed paths frequently over the years since, but, for whatever reason, have seldom played together until recently. A handful of duo performances yielded just one brief document, a 25-minute set recorded at St. Giles-in-the-Fields church, London, in 2008, and subsequently released on the Treader Duos album.

This is a strange state of affairs, not just given the interconnectedness of the British community of improvising musicians within which they operate, but particularly since Sanders and Butcher are (as you can hear) so well suited. They are both meticulous and understated performers, whose improvisations express lifetimes of musical absorption with economy and expressive precision.

The thirty minutes of this album’s “Ropelight” was recorded at the annual Freedom of the City festival, at London’s Conway Hall. The hall is home to an ethical society that promotes the hall’s use as “a hub for freedom of expression and progressive thought”. That makes it perfect, in conceptual terms at least, not just for an annual celebration of the freedom principle in music, but more specifically for the music of Butcher and Sanders, which exemplifies ideational clarity.

As they opened the second afternoon of the festival, light filtered through passing clouds and the partially occluded glass of the roof, and the duo was illuminated by a natural chiaroscuro that seemed to accentuate the music’s malleability. Hence Daylight, which might at first seem a curious title for an album of improvised music, which is usually considered a distinctly crepuscular exercise.

John Butcher recalls that people noticed the light changes, and tells me that the Southampton University performance was also a lunchtime concert. “I liked this title,” he says, “because I think the music of both concerts is quite luminous. There’s is a certain unity to them. It was all daytime music. I think time of day has an effect on how one plays.”

At times Butcher made the acoustical properties of the Conway Hall resonate with the sound of his tenor. Of course this is something he’s renowned for, but I didn’t expect him to achieve it in this most sonically sedate of venues. He often thinks, he says, in terms of colour as much as of direct pitch, and experiences serial collaboration as an additive learning process that necessitates conceptual and technical malleability. You can hear that process at work in his playing with Mark Sanders, who is so in the moment that he seems almost egoless.

The duo’s progress through “Ropelight” is a slow morphogenesis, a sequence of various but consistently non-idiomatic changes. Sanders’ approach to the drums is purposeful but restrained, as he switches between drumsticks, brushes, brass bells and simple hand pats to achieve the required degree of subtlety, always with a deft and musical sensibility and always maintaining clarity of purpose. I’ve heard few improvisations so elegantly managed.

But for all the expansive variegation of the journey through “Ropelight”, it taps only a fraction of the duo’s potentiality. The shorter, more concentrated performances from Southampton compliment the London date beautifully. Throughout the rarefied but conceptually compacted “Flicker”, Butcher and Sanders are exclusively concerned with the flux of new sound relationships. It is only during “Glowstick” that the duo really comes close to evoking the “fire music” that burns at the heart of so much free playing, particularly where drum duets are concerned. But even here, between intensities, the heat of the performance dissipates into exploratory, drawn out textures and harmonics.

Butcher and Sanders assiduously avoid the easy option of oblation to music’s past. Theirs is a novel syncretism of high drama and vivid musicality, their art continually recast in new light.

Related Posts
Freedom of the City 2012, 05 and 06 May 2012 (with John Butcher in Rhodri Davis’ Common Objects septet and Mark Sanders in a quartet tribute to Tony Marsh)
John Butcher and Gino Robair at The London Review Bookshop, 01 May 2012
John Butcher at Cafe Oto (+ John Tilbury and Marcus Schmickler), 11 April 2012