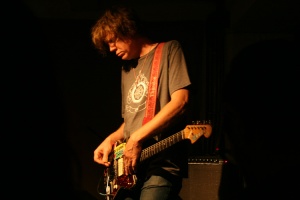 Coming just six months after Thurston Moore’s last visit to OTO, these shows co-hosted with Mats Gustafsson were something I’ve waited a long time to see. Among other past collaborations, Sonic Youth helped Gustafsson to realise his art-noise composition, Hidros 3 (for Patti Smith) in 2004, while the saxophonist played alongside Sonic Youth, Jim O’Rourke and Merzbow on SYR8: Andre Sider Af Sonic Youth in 2005; ample testimony that playing with Gustafsson puts the famously improv-loving guitarist on his mettle.

In the second set of each night, Moore and Gustafsson played long, freeform noise duets, with Gustafsson concentrating mostly on electronics. Moore is ridiculously good at this sort of stuff, knowing just how much he can control feedback by varying amp-proximity, or how loud the detonations he can trigger by bouncing his guitar’s whammy bar off its output jack, while his more orthodox playing favours serried riffage and kinetic thrumming. Meanwhile Gustafsson seemed to play his electronics like a theremin or chaos pad, straining to hold the raucous energy he’d unleashed in check. Bracing stuff; yet it was wonderful to get a shot of his scouring baritone sax before the set was over.

But it wasn’t all about noise. The first set of each night featured duets with each of the invited guest musicians, and a concluding quartet performance. 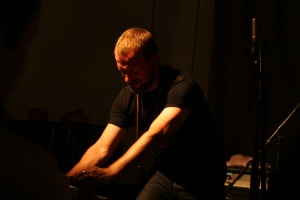 On Saturday night, Gustafsson, on baritone and soprano saxophones, played a sublime duet with Kiku Day on shakahachi, or Japanese, bamboo end-blown flute. Gustafsson matched the shakuhachi’s vibrant, papery pitch and rich tone colours by handling the hefty baritone horn with exceeding deftness as if in a close dance, ruffling the saxophone’s keys while rocking to-and-fro, only lightly touching reed to lips – his feathery sound belying the effort expended in constant variations in embouchure.

The opening duet between Moore and Philip Wachsmann was almost as good, the violinist at his sprightliest and most animated, occasionally slipping into folk idiom à la Bartok, and influencing Moore to a closer than usual consideration of timbre.

The following night Gustafsson pitched raw electronics against the no less volatile and rebarbative synth playing of Pat Thomas, who could’ve been auditioning for Wolf Eyes with the stormy, scurrying rumble of low end he whipped up. Thomas is a keyboardist who seems to have as many approaches as opportunities to play (which are numerous), but his more impressionistic turn on acoustic piano didn’t make much impact in the quartet that concluded the first set. In that performance the biggest surprises came from veteran guitarist John Russell, playing plugged-in with maximal use pedal effects.

Russell’s earlier duet with Moore was Sunday’s highlight, with Moore’s almost casual aggression goading Russell into rebarbative picking and chaffing. But the older man’s innate musicality eventually softened Moore’s stance, and at one point Moore slipped into an almost-recognisable Sonic Youth melody (a fragment from “The Diamond Sea”, perhaps?); a sign of how comfortable he’s become playing outside those parameters.