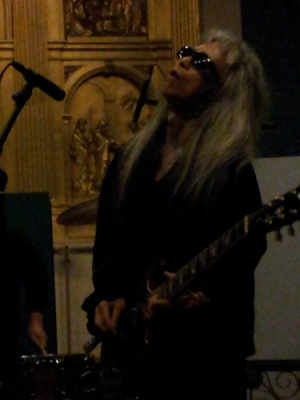 It’s all change with Fushitsusha lately. The lineup of Keiji Haino, Nasuno Mitsuru and Takahashi Ikuro, which recorded Fushitsusha’s last two albums, Hikari to Nazukeyo and Mabushii itazura na inori, both issued earlier this year, and was advertised to play in Hackney, is, it seems, already history.

Bassist Mitsuru, who was also a member of Haino’s ’21st-century blues’ trio Seijaku, played at the HQ of organisers Cafe Oto just two days earlier with both Ruins Songs – a duo with Ruins drummer Yoshida Tatsuya – and the well-established ‘progressive’ power trio, Korekyojinn. The departure of drummer Takahashi, who was with Fushitsusha from 1998-2000 before rejoining to record that brace of new albums, was more surprising, and has deeper consequences.

The current lineup, which played in Hackney, is Keiji Haino plus bassist Futoshi Kamekawa and drummer Ryosuke Kiyasu – the same trio that featured in the recent documentary film, Document Keiji Haino.

The primitivism of Ryosuke Kiyasu, of noisecore outfit Sete Star Sept, does much to redefine the potential of the trio. His percussion style is the radical antithesis of busy, kinetic free music, and often locks the trio’s interactions into a pointillist grid of more or less emphatic unison snare/bass kick strikes, all cued with an apparently simple yet indecipherable  system of gestures by Keiji Haino, according to his whim. Bassist Futoshi Kamekawa was pretty much free to fill in the aural ‘whitespace’ around these contours. The effect was disjointed, and not initially appealing, but at length – and this was a very long concert – the audiences’ expectations and responses were reforged on the new-style Fushitsusha’s brutalist anvil. More on the headline act later.

Local duo Temperatures (James Dunn drums and electronics; Peter Blundell bass and vocals) opened proceedings with a short, unbroken set that pitted Blundell’s constant bass rumble and indecipherable vox against Dunn’s agitated percussion, which was wired up with contact mikes and processed by FX, producing a blanket haze of muzzy detonations and calcified harmonics. Not all of their intentions seemed to be realised – Dunn made frequent alterations that didn’t seem to affect his output much – and a half hour seemed long enough to play this idea out in full, but Temperatures might be worth keeping an eye on.

The principal support was a solo set from saxophonist John Butcher.

Stepping up first on tenor, Butcher caught everyone’s attention with a string of astonishingly harsh, high-pitch stridulations and softer riffles, like water coursing over stone. Playing to the room’s unique acoustics, his noise skittered in surround sound around the high, domed ceiling, gaining dimensionality as Butcher varied his proximity to the mike. With the mike cowled by the horn’s bell, Butcher’s tenor sounded in rich, reverberant sustains.

A second improvisation, this time on soprano, began with harsh ruffles and contrasting, gleaming curlicues of note-shards but ended with Butcher upending expectation, playing sweetly melodic phrases of pure musicality.

Butcher’s set was a masterclass, but this highly anticipated evening was all about Fushitsusha. They began with a right-royal skronk, instantly putting unprotected eardrums at risk, but immediately switched to a piece played at the other extreme of noise, piecing their music together from a dappled spectrum of soft noise with gesturally heightened restraint.

The rest of the set was played out between these two extremes, with each piece structured to highlight  one specific mood of Keiji Haino, the general tendency being a return from the bass-rich, bluesy roughage of Seijaku and latter-day Fushitsusha to the blue-steel sheet-of-sound of former incarnations.

With all minds focused on the leader, problems with Haino’s guitar early on led to a potentially ruinous extended lacuna of rhythmic aimlessness and ghostly vocalese, while a technician did his best to resolve things. Even when Haino was reunited with his guitar, the set seemed unfocused and anti-climactic. Perhaps sensing this, Haino laid his guitar down again, picked up a brass gong and wooden mallet, and played with theatrical physicality in an exuberant sequence of physical leaps and vocal yelps that reanimated the whole enterprise.

The repurposed Fushitsusha then played through their variations getting stronger by each turn: Haino now playing a clean open-string sequence that wiped away the grit to refashion the Fushitsusha sound as a tabula rasa; now re-amping to channel the spirit of Hendrix at his most anthemic; and now dealing out cauterised excoriations whipped along by a primitive but devastatingly effective, dynamically contrasted hard/soft percussion track.

As the evening wore on well past curfew, Haino constantly checked his watch and decided Fushitsusha had more variations to essay, but they finally climaxed with a blast of high-octane, pre-Stooges raw power, then bowled offstage to a roar of approval. And when the house lights snapped on they came back for a short final encore, played with frenetic, puckish abandon.

More Images
My photographs were taken on my phone. Fabio Lugaro took the photpgraph of John Butcher, and there are more of both Butcher and Fushitsusha on his Flickr page.