While the Rolling Stones were p(r)imping their back catalogue arena-style elsewhere in London, Dutch underground veterans The Ex celebrated their own eccentric “33.3 years anniversary” with an occasionally riotous three night stand at a packed Cafe Oto.

The highlight for me was always going to be the relatively rare London performance by the Ex stripped to its basics – just founder member Terrie Hessels, long-term drummer Katherina Bornefeld, 1990 recruit Andy Moor, and Arnold de Boer, who joined in 2009.

It seems incredible that de Boer, aka Zea, was recruited from Zea the band just three years ago, as it’s his rhythm partnership with Bornefeld that defines the essence of the current Ex sound, which Moore and Hessels promote with their inimitable improv guitar duopoly.

Zea opened the first night playing rhythm guitar alongside long-term Ex associate Xavier Charles on clarinet – a short, sprightly set of songs that began with Leadbelly’s “Bourgeois Blues” but mostly focused on introspective humour, with originals such as “My Exploding Head”, which riffs on social embarrassment and the dangers of spicy food (as Zea explained: “the only spice we have in the Netherlands is salt”). His rhythm playing is a reduction of the light, tight repetitions characteristic of some east African musics, and just as infectiously propulsive.

Where the Zea/Charles duo was charming The Ex were explosive. They closed the first night with a kinetic set that soon saw the venue’s rickety wooden chairs cleared away by an audience wanting to dance. Zea’s needling african rhythms were powerfully amplified by Bornefeld’s fluid drumming and abraded by the spiky extemporisations of the Ex guitars. Their songbook was mostly, if not all new, but they encored for the third and final time with the haunting “HIdegen Fujnak a Szelek” from the classic Scrabbling at the Lock album.

Each night of the residency followed a similar pattern, with ad hoc performances by individual members and guests followed by a main support band. Of the two I saw, Jackdaw with Crowbar and Trash Kit couldn’t be less alike: Trash Kit are three young women who play afrobeat-inflected powerpop; Jackdaw with Crowbar are three old farts playing comedic anarcho-electro. But the choices of both said something about Ex orthodoxy.

While MC Stewart Lee’s assertion that he saw JWC play an inspiring set in Edinburgh in 1987 was amusingly refuted by the band, who say they were never there, I did see JWC play an uproarious show around that time at the Star and Garter in Leamington Spa, our shared hometown. I remember it as a dadaist Pogues melee. Now, back in action after a 20-year retirement, JWC play “visual music with thrash film” – twin clown MCs + tabletop slide guitar over prerecorded electronic rhythms. It’s not hard to see why their unselfconscious blend of cack-handed DIY professionalism appeals to the Ex.

Trash Kit were part Ramones, part Erase Errata: tight, fat-free music that marries postpunk energy to an arthouse sensibility with afro-rhythmic concision. All of their songs are cut from the same cloth but each has its characteristic quirks and they gain strength through accumulation. The freshness and intelligence of Trash Kit should only gain in potency as it matures. 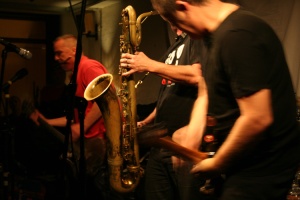 Before the main guest slot on Thursday, the Swedish saxophonist Mats Gustafsson played in a trio with Andy Moor and Terrie Ex. This was a brawny, galvanic three-way improv, with Gustafsson’s combative baritone harried by Terrie Ex’s percussive/abrasive playing and goaded by the harmonic riffage at the core of Moore’s improv. Superb.

It was a treat to hear the Gustafsson variation on the Ex guitarists’ Lean Left collaboration with Ken Vandermark and Paal Nilssen-Love, particularly since Vandermark was on hand to follow it up with a solo performance.

Perhaps inspired by the news that Peter Brötzmann has put his Chicago Tentet, in which both Vandermark and Gustafsson play, on ice, Vandermark began with a passionate tenor solo full of rugged vigour, as if essaying a distillation of every Brötzmann-ism he’s absorbed. Further improvs on clarinet and baritone (the latter dedicated to Dutch avant-gardist Jaap Blonk) showed Vandermark’s inclusive grasp of Jazz idioms from Dixieland to free jazz, blending lyricism and textural abstraction in a fine, spellbinding performance.

Friday night began with two duo performances. In the first Terrie Ex played almost exclusively using a drum stick to strike or bow his guitar to the accompaniment of Xavier Charles‘ loquacious, incisive clarinet. Ex’s performance was as physical as ever, but the energy was channelled into playing of real delicacy and discrimination.

Steve Beresford had initially seemed a little uncomfortable in his role as the night’s MC, but he came into his own introducing and then performing on piano a duet with trombonist Wolter Wierbos. Beresford noted tongue-in-cheek how very trendy the trombone is these days, also (less tongue-in-cheek) how remarkable Wierbos can make one sound. And he did just that, in a performative improv during which he literally took the ‘bone apart and pieced it together again, with only the slightest hint of self-effacing kitsch.

Bridging this and Trash Kit’s set, Valentina Campora gamely performed a solo dance piece, which was choreographed by Gabriella Maiorino to subtly dramatic music pre-recorded by Andy Moor and Yannis Kyriakides. Beginning in silence, standing straight, back turned to the audience, Campora slowly turned her upper torso in a tight spiral that put her sturdy musculature under pressure which she relieved through a graceful, lissom uncoiling, translating the tension thus relieved in increasingly forcefully energetic and expressive movement. She ended with an incursion into the audience, settling with the music’s diminution into a tense state of stillness, provocatively presenting her tongue in apparent defiance of any perceived vulnerability.

Moor and Kyriakides, a Cypriot composer whose work melds traditional performance practice with digital media and electronics, have collaborated on a number of pieces, some documented on Unsounds. Folia gives the flavour of the music that Campora danced to.

The dance theme extended into Friday night’s climax, which began with a dynamic drum duet from the Ex’s Katherina Bornefeld and Tony Buck (best known as a member of The Necks), and developed as a celebration of the Ex’s long involvement in collaborations with Ethiopian music. Sadly the great saxophonist Getatchew Mekuria, with whom the Ex have recorded two CDs, wasn’t in attendance, but with Zea initially on trumpet joining Xavier Charles (clarinet), Ken Vandermark (baritone sax) and Walter Wierbos (trombone) in an ad hoc horn section and the ex guitars fronting Bornefeld and Buck, Oto was primed again for detonation.

The Ex’s take on Ethiopian music is a raucous, stomping, impulsive affair, a passionate declamatory fanfare shaping an infectious, booty-shaking groove. Add some vividly dressed local Ethiopian dancers (some apparently professional, others apparently not) to show the houseful of arthouse anarchists how it’s done, and the scene was set for joyous combustion.

Zea was in his element here, switching first from trumpet to sampler, then to the mic to sing, dance and exhort everyone to disinhibition. As the set finally climaxed on the anthemic “Ethiopia Hagere”, no one elsewhere in London was having a better time, I guarantee, than Zea, the Ex, their friends and audience.

The Ex closed the following, third and final night of the residency with a set accompanied by Brass Unbound, a thoroughly road-tested horn section comprising Ken Vandermark, Roy Paci, Wolter Wierbos, and Ab Baars. The main support was gritty French rock trio Api Uiz, and four duos were also scheduled with guests Ab Baars, Anne-James Chaton, John Butcher, Tony Buck, and MC Roy Paci. Sadly I couldn’t be there. Here’s how Ken Vandermark summed it up in a tweet: