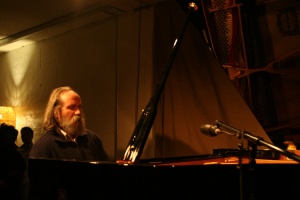 Returning to Cafe Oto almost a year to the day since his first visit (on which, see my review for a brief biographical introduction), Lubomyr Melnyk debuted two relatively short pieces, took a breather and then played a longer composition, “The Windmills”, which was premiered in 2010.

The first piece was rich and sonorous, with a bucolic, pastoral vibe. The second was a concise demonstration of his ‘continuous music’, for which he plays rapid note-series and layered arpeggios, using sustain to generate overtones and sympathetic resonances, to create what he has described as “tapestries of sound”.

Melnyk introduced “The Windmills” as a composite arrangement of previously unconnected fragments, which had came together in a train of associations triggered by the viewing of one of Walt Disney Silly Symphonies (undoubtedly, this was The Old Mill, which you can view on YouTube).

Melnyk explained that “The Windmills” describes a narrative arc, beginning with the windmill coming to live, its gears grinding into action. He evoked the idea of gears similarly animating our brains and other natural phenomena. (After the concert, @Unseen_Worlds – a record label that recently reissued Melnyk’s debut album, KMH tweeted: “Lubomyr Melnyk is a wizard…who believes in magic. I’m half kidding here. I’ve never heard Lubomyr call himself a wizard, but plenty about magic.”)

As the narrative continues, the windmill is battered by a storm, metaphorically (or perhaps metaphysically) dies, and ascends, singing, to heaven.

Melnyk’s brisk evocation of the windmill grinding into action was unusually –  his music contains some striking note combinations, but few that aren’t mellifluous – if appropriately off-kilter, but his recital soon settled into a measured ebb and flow of modulated dynamics. It was at once both mechanical – cyclical repetitions, and the intricate warp and weft of an evolving contrapuntal structure – and lyrically fluid.

The layering of Melnyk’s live performance with his own pre-recorded accompaniment – typically recorded earlier the same day, on the same piano, to achieve, as far as possible, a holistic unity of sound – created a laminal effect, channeling the listener’s focus. The flow of notes was pellucid, like clear water in shallow runnels, becoming only marginally more turbid come the intensity of the storm sequence.

For all the melodic clarity of Lubomyr Melnyk’s music there’s a steely exactitude to both his composing and performing; yet for all its polyrhythmic complexity there’s an easy familiarity to his virtuosity. Melnyk makes music approaching minimalism that’s lush and seductive, and thankfully too brittle to be cloying. For “The Windmills”, he adds a subtle dramaturgy to the blend.