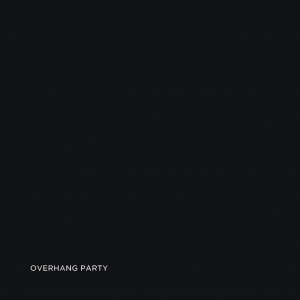 Overhang Party, a Japanese psychedelic rock band, was formed in January 1991 by Rinji Fukuoka, who is also the founder of the Pataphysique imprint.

This 4CD set on Important Records collects the band’s three official studio albums—Overhang Party 1, 2 and 4—together with a final selection titled Lost Recordings from 2003.

Overhang Party was initially released in 1993 as a private press of just 200 copies. Mutant Music pressed an additional 500 to vinyl in 2008. “Twins of Sun”, its first track, is little more than a scrabble of percussion layered with ghostly, fx’d vocalese. It promises a sudden irruption into a storm of tribal psychedelia, á la Boredoms, but develops only into a loose drum solo. It’s a low-key start. “Bass Oscillation” has the same elements subsumed within a muzzy whorl of billowing feedback effects.

However by the end of track three, “One’s Double”, we have our bearings: Overhang Party as a less feral and benighted Fushitsusha, Rinji voicing incantations over slow-burn, psychedelic blues; softly strummed bass lines in counterpoint to squalling electric guitar solos, which resolve prettily, and are reprised with wiry, ductile clarity. “Air” atomises the same constituent elements in a cloud of feedback and VCS3 synthesizer (played by guest Kunukunu), eventually coalescing around a limber, melodic bass line. The trio then slips slowly back into languid psychedelia on the twelve minute-long “Facing the Night”.

A long bonus track, “G House Blues”, recorded six years later with a new guitarist, is well chosen to complete the album. It begins with fx’d guitar sustain and the sound of Rinji’s bowed, scoured violin, a harsh duet sustained and overlaid with fretwork while percussion ripples beneath; eventually it corrodes to a thin skein of noise, then silence.

Overhang Party 2 followed in 1994, in editions of just 200 LPs and 500 CDs. This album is much more immediate; more rhythm-driven, with songs borne along on psychedelic rock grooves. “My Blue Heaven” and “No Traveler Returns” are properly anthemic (the former is reprised in a stirring live version as a bonus track, which—like the first album’s bonus—dates from 1999). “La Fièvre” is a relatively straightforward garage rocker; “Falling” a glowering slow-burner that revisits the mood of the first album.

By the time of Overhang Party 4 (1998), bassist Nishino has been replaced with electric guitarist Akira Yamanouchi. The trio’s bass-free dual-guitar sound is fleshed out with both Iwao and Rinji doubling on keyboards, and Rinji also gets a credit for strings.

On “Pressage” the music is fully in the service of Rinji’s song, the lyric carried along by surging piano ostinati, formerly anchor-less billows of electric guitar now blossoming from the main stem and buzzing around it in cloud static. “Le Feu Folet (The Fire Within)” is a clearly enunciated song executed acoustically on strings, piano and drums; it’s almost shockingly jaunty in context, except the development seems perfectly natural, as if the evolution of the band’s sound across three albums and more than half a decade was premeditated, the entirety always intended to be absorbed in one continuous sitting.

“Le Feu Folet” is followed by the billow of guitar fx which preludes “Barcelona”, a track which returns us to the jaunty pop-psych vibe of Overhang Party 2 but sweetens it with strings. It ends with a coda for piano and electric guitar.

Transitions from songform to instrumental abstraction are now seamless. Although passing similarities between early Overhang Party and the Keiji Haino of Nijiumu or Fushitsusha remain, Rinji’s music here trades the anguish of Haino for a positivity that bridges to the mainstream, and he paints from a broader palette.

“Then the Ship Sank” is constructed around a classic rock riff and builds with orchestral solidity to an anthemic climax, and “Winter Lovers” takes us right back to the garage floor. “Mirror” is a chugging distillation of the Overhang sound with a guest female vocal, connecting with both the early Velvet Underground at their most primal and Blue Cheer. The album proper is rounded out with the studio take on “G House Blues”, a nod to the group’s roots. The bonus track here is a short, straightforward rocker.

This is an excellent set. Though comprehensive, it does leave a few nuggets for avid collectors to track down. There’s a limited edition (100 copies) CDR of unreleased live and rehearsal tracks, recorded 2000-2002 (a period not represented here); a double CD titled Overhang Party ‎– Otherside Of, released by Pataphysical in 2000. There’s also the aforementioned live album, plus another, Live Before And After 2004-2006, and a DVD, Overhang Party Live At U.F.O. Club May 20, 2006 ‎(both There, Musik Atlach; 2006).

The final, fourth disc of this set presents six tracks recorded between 2003 and 2005, by the same band that recorded Overhang Party 4 plus Sachiko on bass. Two of these tracks, and two of the bonuses, perhaps in alternate versions, were included on a 2003 private press CDR that was given away at a concert: Overhang Party ‎– Out Takes From 1996 To 2003 (Memorial Edition For 26 September 2003).

Here titled Lost Recordings, this is a no less coherent selection than any of the three albums proper; if anything the group sound is bolder and more distinctive here. All of the elements that fed into the Overhang Party narrative are here recombinant, though with acoustic guitar now accompanying the melodic contour on songs like “Prayer of a Fool”, and the power-surges of electric guitar now more expertly shaped to serve melodic purpose. Late vintage Overhang Party has more in common with the folk-tinged madrigals of Ghost than any more extreme proponent of Japanese psychedelia.

But if “Marseille”—”Chasing to the ends of the land / The sun, that melts into the sea”—is a beautifully mellow paean to dreaming, then “Who are You” is altogether more elliptical, and the closing “Duo Improvisation”—for percussion and slowly-wracked electric guitar—is satisfyingly, experimentally nebulous. Although Overhang Party sound relatively conventional at first, given the extremes of certain strands of Japanese psych, here’s a group still opening up new territory.

Overhang Party is over as of January 2008, though its members continue under a new name, Majutsu no Niwa. I think I’ll check them out.