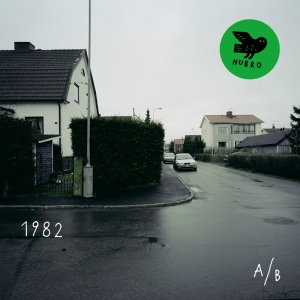 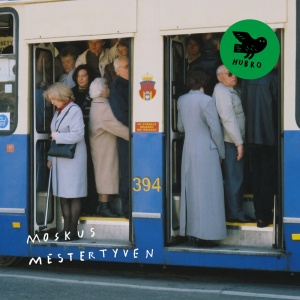 For “18:16”, composer Stian Omenås extrapolated from germinal improvisations by 1982’s core trio to create the arrangement for wind sextet which is heard overlaid on the core trio to create the piece. While 1982 recorded their parts at a studio in Bergen, the wind sextet recorded in Oslo with Jan Erik Kongshaug, ECM’s favoured sound engineer since the early 70s. Unfortunately the spatial and temporal disconnect is evident in the results, which mostly stay true to 1982’s characteristic economic expressivity but sound stilted alongside the more artful trio pieces. Still, the horns are beautifully played and arranged (in a style reminiscent of Debussy) , and the trio occasionally intrude into the music in impish irruptions of unfettered discord and textural impressionism (now think Stravinski).

Side B, by contrast, is fairly typical 1982, in terms of not just brevity, but also form and execution. Track 2 (“02:01”) is insistent by 1982’s usually placid standards: a simple violin/piano/drums arrangement with a breathless, staccato rhythm. “03:51” is likewise direct, a quickening rhythm pulse and harmonium drone carrying a bowed folksong melody. On “05:00” he softest of bass drum pulses and drumhead brushings are married to a slow, pensive Nordic melody in the fiddle line that eventually draws Apeland’s harmonium out as a bridge to a somber resolution.

Once the entry of Apeland’s harmonium lifts a formerly ominous mood, Økland adds wordless vocals to the suspenseful abstractions of “03:12”, shaping melodies in his mouth; another subtle innovation. And although there are no vocals on the short and skittish “01:08”, his fiddle produces echoes of Tuvan throat song.

These miniatures, albeit arguably no more than sketches, seem perfectly substantial and carry a surprising weight of emotional investment. The more complex “18:16” trades some of that charge, and it’s not clear what, if anything, has been gained.

Moskus’ debut album, Salmesykkel, received both glowing reviews in the jazz press and two Norwegian Grammy nominations. But they aren’t standing still. On Mestertyven, they too explore new directions.

I must confess that I didn’t really give Salmesykkel a proper listen until Mestertyven sent me back to it. The first portion of the earlier album is fine, but on cursory listening offers nothing particularly to distinguish it from the glut of piano trios bobbing in EST’s artistic and commercial wake. I missed out on its second half, where this trio’s idiosyncrasies are more evident. Here, they are amplified from the start.

Rather than return to a professional studio, this time around Moskus opted for the acoustics of a cruciform wooden church built in 1647. Perhaps more significantly, Anja Lauvdal chose an upright piano in preference to a grand, and the trio eschewed rehearsed material, albeit they say they had “plenty of ideas after several tours and a lot of experimentation at a rehearsal venue”. Hours of recorded material were later “trimmed down” to create Mestertyven (in English: “Master Thief”).

In a telling quote, Lauvdal says: “The sound of the upright piano feels more intimate and more ordinary, and it has a different tonal palette. A little harder. The sound gives associations to old recordings that we have listened to a lot, made in cafés and restaurants.” On their new album, Moskus have successfully imbued their music with just these qualities.

While some traces of mainstream jazz pianism remain, many aspects of Mestertyven‘s sound, such as the quirkily gentleness of “Glasblåsern” or the skiffle motorik of “Fuglene var i ertehumør” are entirely sui generis. “Tradisjonskvelern”, in its apparent simplicity, hints at lyrical minimalism, but it has a queer little interlude, while “Tandem med Sankt Peter” is not so much jazzy as a jaunty, discombobulated song form sans vocals. “Rullings” offsets a similarly jaunty, thrumming bass/drums groove with rolling piano chords, while “Lille Trille”, for piano only, is dense with overlapping arpeggios. Elsewhere, “Yttersvingen” is much more abstract and “Jag ärr ett ägg” has much in common with the comparatively ascetic, folk-tinged sound of 1982.

Moskus’ latest improvisations blend rickety construction with the acuity of a working trio’s close rapport, and Mestertyven is a hugely enjoyable album. It doesn’t rise above the conventions of the mainstream, but swims against it. Bravo.

On past projects, Håkon Stene has played folk music with 1982’s Nils Økland, electronica with Pantha de Prince, baroque music with Rolf Lislevand, and contemporary music with asamisimasa, whose repertoire introduced Stene to the music of British Composer Laurence Crane.

On Lush Laments for Lazy Mammal Crane focuses on contemporary composition in the contemplative, non-idiomatic lineage of Cage and Feldman, and all but three of its pieces were penned by Crane. The exceptions are “Hi Tremolo”, composed by Gavin Bryars; Stene’s own “Sit”; and “Low Genths” by Christian Wallumrød, who plays piano on both “Low Genths” and Crane’s “Prelude for HS”.

Ordinarily a percussionist, on this album Stene turns multi-instrumentalist. He’s credited, for example, with electric guitar and acoustic guitar with e-bow, although apparently he hasn’t touched a guitar in 20 years; also keys, vibes and bowed marimba. With these tools he focusses on the simple harmonic characteristics of the music, spurning overt expressivity.

Crane’s “Prelude for HS”, “See Our Lake 1” and “Holt” are all miniatures, and all feature cellist Tanja Orning. On “Prelude for HS”, quietly dramatic unison strings punctuate simple vibraphone hits, and that’s it. Each intervention gains substance in its decay. “Holt” reprises the mood, but fleshes it out with organ sustains. On the more longer, but not necessarily more expansive “Bobby J”, “Riis” and “Blue Blue Blue”, Stene plays solo.

Crane’s scores keep instruction to a minimum, affording their interpreters an apparent transparency. Stene describes his music as: “profoundly emotional…free of the often feigned affect that can characterise…music that strives towards expressiveness.” While the almost courtly grace and simplicity of “See Our Lake 1” hints at plainsong, “Riis” fills the album’s heart with a churchy, expansive drone of harmonium and e-bowed acoustic guitar.

Stene’s own “Sit” is the album’s most compact piece, a slow whorl of organ drone, with a hint of echo and cloud harmonics. Its most beguiling is Wallumrød’s “Low Genths”, on which the composer’s piano sounds treated. Perhaps it’s played from both inside and out to create its dazzling note clusters, repeatedly stilled by softly-struck chords, and piercing upper-register trills.

The album’s final, most simply affective piece is Crane’s “Blue Blue Blue”, on which Stene plays steady, chordal pulses enriched by subtley modulated emphases. As with each of Crane’s pieces, developments in the music are exceedingly subtle, yet effective.