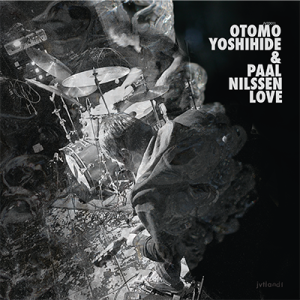 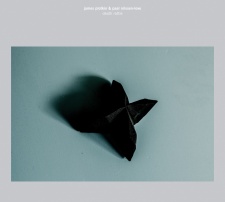 Paal Nilssen-Love is a key player in today’s diverse free music scene. You’ll have heard him in one or other of his main projects: The Thing, fronted by Mats Gustafsson; the Norwegian/Swedish jazz quintet Atomic; Peter Brötzmann’s pluged-in quartet Hairy Bones; the Double Tandem trio with Ken Vandermark and Ab Baars; and another trio with Massimo Pupillo and Lasse Marhaug. Currently fronting his no-shit-named Large Unit, he also thrives on starkly oppositional duo exchanges, notably with Brötzmann. Each of the present titles sees him pitted, pugilist style, against individual opponents: Japanese guitarist and musical polymath Otomo Yoshihide; American guitarist and producer James Plotkin; and Norwegian pianist Sten Sandell.

This recording—from Copenhagen JazzHouse, 4 May 2013—drops the user right into the action, as Yoshihide—probably playing with the two-pronged loop of rebar that he favours as an industrial-style pick—whips lacerating barbs of guitar into instantly turbulent percussion. His switch to chordal sustains after just four minutes steadies the performance, drawing Nilssen-Loves rumpus down to a racing heartbeat. Eight minutes in, and Yoshihide’s tapping out gong sounds amid high-pitch sustains and reverbed bell-tone resonances, all reverberating in carefully controlled feedback.

Yet more rarefied guitar soundings echo the minimal no-input electronics Yoshihide explores elsewhere with Sachiko M, to which Nilssen-Love responds with light bell-tones and the rustling of percussion peripherals, growing more focused and agitative only as Yoshihide pierces blossoming feedback with sustained contact sounds, feeding a billowing miasma of static distortion. By the time the guitarist begins to spool out scorching high-tension licks a la Fushitsusha, Nilssen-Love is combining hard-kicking backbeats with splashy polyrhythmic rounds.

Rarely one to lose himself in a free-for-all, Yoshihide soon reels things in again with high-contrast, acidically bluesy fretwork, prompting a punchy full-kit solo from Nilssen-Love. As this eases off Yoshihide re-enters, initially playing pure FX, sounding just like a warning siren at one point, and then lets rip with uncooked psych-rock soloing, and Nilsen-Love responds by keeping his rhythms hyper-stoked. The rest of the set plays out at a pitch of high intensity.

At 33:38 this is a short album, but its yield is concentrated and supremely potent. It ends on a gradual fade-out, as Yoshihide locks into a rotor groove, a gradual descent cushioned by Nilssen-Love’s calmando response. I usually hate fades, but this one works nicely.

Having first heard Nilssen-Love from his playing in Raoul Bjorkenheim’s Scorch Trio, Plotkin said: “There’s a very fluid feel to what Paal’s doing despite the ferocity. Instead of trying to match the chaos, I opted to build a more solid foundation of repetition and melody for him to launch from. I really appreciated the role reversal of drummer and guitarist.”

Comprising four ten minute pieces, effectively a suite, the considered focus of Death Rattle contrasts nicely with the expansive improv cooked up with Otomo Yoshihide. It was the first in an occasional series of Paal Nilssen-Love duos to be issued on Rune Grammofon, of which Jacana (reviewed below) is the latest.

On “The Skin, the Colour”, Plotkin jams on looping serried, staccato riffs within a welter of jarring, distortional fx, into which Nilssen-Love drives, punching his way through, an octopetal polyrhythmic powerhouse with a solid kick on the backbeat. Within Plotkin’s sound there’s a thick stand of grimy bass. The momentum is unrelenting until, after ten minutes, there’s a mere suggestion of melody before the piece abruptly ends. That melodic abstract is picked up in the rivulet shards of plucked guitar that glint over the looping midrange figure that begins “Primateria”.

As Plotkin consolidates this piece, tightening the strands of his playing into a single, tensile line that he keeps tautly under stress, Nilssen-Love rustles and rummages around, occasionally sounding gongs and, as the piece goes progresses, playing fast, concerted rounds on cymbals and skins. This piece is all about the gradual, controlled diminution of tension and energies amassed.

The solo guitar riff that begins “Cock Circus” is metal with a dirty hit of Funkadelic. Plotkin continues to vary its movement, grinding hard on an increasingly distorted sound until it smears into a raw squall under Nilssen-Love’s combatively responsive  drumming. Finally the title track takes the by now familiar jarring, staccato guitar pattern and allows it to ground. Nilssen-Love then patterns figures around Plotkin’s fitful bursts of energy and high-toned sustains that coalesce in brief auroras.

Of Nilssen-Love’s partners on these dates, he’s probably best acquainted with Norwegian pianist Sten Sandell, a regular fixture at Blow Out, a weekly club which Nilssen-Love co-founded. Where the two guitarists focus Nilssen-Love’s energies into relatively narrow channels of power-play, this exchange—recorded at the 2013 Kongsberg Jazz Festival—is volcanic and expansive. Sandell treats his piano much like a percussion instrument (as Alexander Hawkins says in notes to his own Song Singular, the instrument gives its player “88 drums to choose from”, and without recourse to the surge and sustain of electricity the focus is on mercurial invention.

Jacana‘s long first piece, “Curvature” (23:10) is it’s most irruptive and discursive. Preliminary soundings aside, for the first eight minutes Sandell is at his most flighty and exuberant, pitching against Nilssen-Love’s one-man percussion batterie. Then he anchors with brutalist ostinatos, and Nilssen-Love distills his attack to little more than cymbal-scrapes, before launching a brief, compacted line of tumbling momentum reminiscent of Conlon Nancarrow’s intricate, boogie-abstract player-piano. Another still point at 11:00 effectively bisects the performance, a silence which NL works up with splashy cymbals and gong soundings prompting Sandell to respond with glinting high-pitch abstractions and a midrange counterpoint melody. Renewed turbulence yields a sustainedly thunderous orchestral climax, with waves of percussion pummelling an edifice of rolling chordal pianism. A whistle signals a sudden breaking, albeit there’s still plenty of agitation played out in the drawdown to a concluding exchange of pointillist keywork and handclaps.

There’s some recalibration before “Kauri” (17:00) really gets underway with Sandell essaying rambunctious postbop against Nilssen-Love’s freestyle barrage. An ebb and surge to a brief exchange of heightened intensity precedes another yielding a silence, at 07:09, which Sandell breaks with a simple melody chorded out to accompany wordless throat-singing. That develops into an initially bouncy Sandell solo in Monkish stride-style, ending on a damped decay. From 11:10, Nilssen-Love shapes a rangy solo from choice cymbal hits into a spacious but phenomenally kinetic full-kit workout. Sandell pitches straight into the vortex for a tumultuous, tightly controlled descent to a beautifully modulated conclusion.

After the exhausting body of the set, the brief “Jacana” (04:20) is refreshingly bright, with deft touches from both parties pitched against dynamically intense swells of sound. Sandell’s single-key key hits blend brightly with his own jaunty whistling, and Nissen-Love responds with deft mallet rounds and gong strikes. A delicate coda has bell sounds resonating amid glinting shards and rumbling, suatained decay from Sandell’s grand.