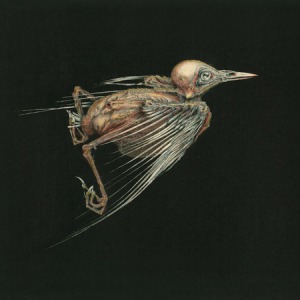 Meshes of Voice is a suite of songs extrapolated from musings on a loose but distinctively associative constellation of concepts. Still, if you know the music of Susanna and Jenny Hval, you might find that Meshes of Voice matches expectations surprisingly closely.

Hval is a writer and performer of songs and prose which often exhibits, sometimes surreally, often disarmingly frank, and always artful fascinations with sex and gender. Susanna is an equally artful singer/songwriter, and a renowned re-worker of secondhand emotions from often unexpectedly mainstream musical sources.

Their album is the end product of a collaboration that began with an initial exchange of letters, and came to fruition in two live performances in Oslo in 2009, first at the Oslo Jazz Festival, then at the Henie Onstad Art Centre, where the album was recorded. (A fine production by Helge ‘Deathprod’ Sten, Susanna’s husband, belies its live genesis.)

it’s an even-handedly collaborative endeavour. Each of the principe’s personae, expressed in their contrastingly distinctive voices, come to the fore at times, pretty much on alternate pieces in fact, but in each case the presence of the other, though backgrounded, exerts a palpable influence. Susanna’s voice is the richer, more rounded and grounded; Hval’s is flighty, brittle, sometimes childlike but then, at times, it can be disarmingly steely. At times, as the performance progresses, they converge, and it’s harder to tell which is which. The subtle modulation and extension by FX of each voice is as beautifully variegated as the album’s title suggests. At any rate, they sound like they know each other inside out, and it’s on insides out they dwell: recurrent mental images include a body at a threshold, the threshold of a body, bones, milk and honey, a black lake.

The mood is pretty even throughout, with no startling dynamic contrasts. The general sensibility is a theatrical sort of ambient. Ambience, that is, charged with tension and enlivened with subtle theatricality. There’s plenty of richness here to keep attention rapt.

Most every piece runs into the next, with lyrics revisited and recast as the performance – a suite, as I say, rather than a collection of songs – is spun with careful attention to soundscaping. Its instrumentation is an astutely effective blend of acoustic (Susanna’s piano and harmonium, Hval’s autoharp, collaborator Jo Berger Myhre’s double bass and zither) and electronic inputs (note all four musicians are credited with noise and effects). The even feel and rich weave of textures lends the album depth and concentration.

From press quotes, Hval says: “Mythical animals were a big inspiration.” Susanna adds: “We looked at Medusa, Athena and Harpy (a combination of woman and bird) – as examples of depictions of woman – the ugly, the goddess-like, the gruesome.” Also, the specifically-cited inspiration of surrealist filmmaker Maya Deren, and her 1943 film Meshes of the Afternoon, with its cloaked protagonist’s reflective face, makes perfect sense.

Hval is oracular on “I have Walked this Body”, the album’s standout, most expansive and richly detailed track, which blends Nordic folksong with ambient electronica in a dark, many-hued dream ambience shading into nightmare; a harmonium/flute blend twisted by processing and distorted electric guitar. Susanna’s limpid, uncluttered piano and vocal on the following, pastoral “O Sun O Medusa” is a delicious contrast.

“A Mirror in My Mouth” picks up the melody threaded through “O Sun O Medusa”, and Hval’s vocal holds a mirror to Susanna’s, trancing on a refrain of “The lips / The mouth / … / A cataract of sound” to the accompaniment of cleanly picked acoustic guitar and subtle bass: “Out of spit my children grow/Churning in my mouth/In my mouth.”

“I Have a Darkness” sets processed and multi-tracked voices in a fog of static haze. Blooming horn sounds accrete to a distantly thunderous landslide of distorted noise. On “Honey Dew”, just over a minute long, Susanna sings: “Dawn came quiet/Dawn came cool/The inside of my eyelid is glazed with honeydew” – a refrain picked up later on “Dawn”, before a coda of wordless vocalese embellishing a harmonium drone.

Hval sings “Medusa” in first person, with a rare overt touch of dramatics, to the accompaniment of her own courtly autoharp/piano. Unexpectedly, “the smell of hot, hot custard fills the air”. Perhaps that’s the smell of “Milk Pleasures”: the track thus titles spins out suggestive and ethereal vocals merged with noise, and ebbs leaving only a plaintive chant of “milk…running down my bones” and creaking, as of a wooden vessel adrift on a darkling sea. Or perhaps not a sea but the Black Lake, the mirror of the soul, the heart rippling inside the protagonist’s chest.