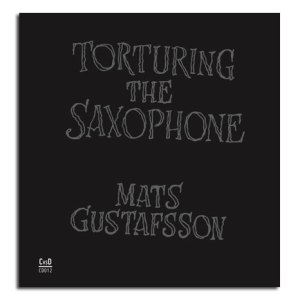 Most of the music on this compilation originally appeared across three separate vinyl albums, each in a single edition of 99 copies, each dedicated to one of Swedish saxophonist Mats Gustafsson’s favourite musicians: Duke Ellington, Albert (and Donald) Ayler, and post-bop baritone player Lars Gullin.

The first five cuts are all Ellington’s, all played by Gustafsson on tenor sax supplemented by live electronics.

“In a Sentimental Mood” is tonally soft, blue and bruised, but it incorporates an ‘out’ sequence of semi-vocalised abstractions. “I Never Felt this Way Before”, by contrast, sounds like a feedback stylophone solo over gritty, distorted loops. “Come Sunday” is brief and breathlessly blown, its melody reconstructed on a spine of plosive key pops.

A balance between acoustic and electronic sounds and textures having been established, there’s no saxophony amid the electronic riffles and course rotor grindings that constitute “Blue Goose”. I wasn’t familiar with the melody of “Blue Goose” before, and nothing’s changed there, but Gustafsson is more faithful to the melodic contour of “Sophisticated Lady”, around which he traces, with feathery lightness, a new, discursive contour.

With the Ellingtonia dispatched in around twenty minutes, Gustafsson, now on baritone, devotes equal time to Don Ayler’s “Our Prayer” (7:10), and to Donald’s brother Albert’s “Angels/Spirits” (13:29) and “Ghosts” (4:44). After a music box intro, Gustafsson yields the former slowly, expressively attentive to the rich, solemn timbre and textural depth of the low horn. Although he drifts toward exhortation, and flashes sudden focused intensities, he mostly treats “Angels/Spirits” in the same ruminant, borderline mournful way. He’s gruffer sermonising “Ghosts” with raw subdued passion, keenly attentive to Ayler’s soulful melodicism.

The first seven pieces having ben recorded over two sessions in 2008 and 2009, “Ghosts” and a single piece by Lars Gullin, “Danny’s Dream”, weren’t captured until separate dates in 2001. Still on Baritone, Gustafsson dwells on the latter for 22:30, no more hurried, staying faithful for fourteen minutes before breaking into coarse vocalese, shrilly braying variations, and a diminution into raw contact sounds that bridge to an even more subtle reprise of the composition’s tuneful essence.

The album’s liner notes comprise a missive from comics artist and vintage music collector R. Crumb, penned directly in response to Gustafsson’s music. it was Crumb who thus christened the collection Torturing the Saxophone. “I just totally fail…to see what this has to do with music as I understand it,” he wrote; “or what in God’s name is going on in your head that you would want to make such noises on a musical instrument. I was kind of shocked at what a negative, unpleasant experience it was, listening to it.” The inner sleeve carries the text in full, as a badge of perverse pride.

It’s had to see what Crumb objected to so strongly, unless (it isn’t specified) he heard, or focused only the pieces ‘enhanced’ with Gustafsson’s abrasive electronics. The other material here is handled, touchingly, with evident tenderness.

Buy Torturing the Saxophone direct from Corbett Vs. Dempsey.