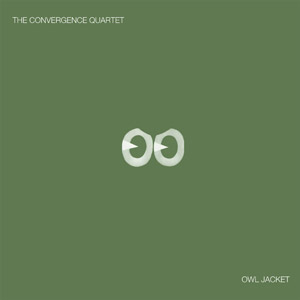 The Convergence Quartet’s last album, their third, Slow and Steady (NoBusiness, 2013) evinced a maturing collective identity, and rightly attracted a lot of attention for bettering the eclectic Song/Dance (2009, Clean Feed), a fine set in itself.

Owl Jacket—recorded in a London studio in October 2013, two years after the Slow and Steady concert recording—confirms the Quartet’s steady refinement and maturity. It’s a beautifully unforced set, and, although there’s plenty of individual artistry on display throughout, the players eschew expressive extravagance in favour of depth of feeling.

It’s no wonder this international group, each of whom is a bandleader in his own right, continues to find time for one another, since few other groups channel both the charge of free improvisation and the sensitivity of empathetic performance quite as well as Convergence do.

As ever, all four members contribute compositions or arrangements, including two of traditional African music by Canadian drummer Harris Eisenstadt. One of these, a Ghanaian traditional, is the lead track on side one. (Although I’m reviewing a promotional CD, Owl Jacket is available commercially only in digital or vinyl editions, the latter limited to just 300 copies.)

“Dogbe Na Wo Lo” is given a stately but mournfully smouldering interpretation, with cornetist Taylor Ho Bynum only simmering at first over brittle percussion and simple chordal piano. His playing gets impassioned as a percussion thunder rises, only for accumulated tensions to dissipate after billowing just briefly. Bassist Dominic Lash is remarkable throughout, binding sinuously to pianist Alexander Hawkins’ chords then slipping free to pulse amid the dying embers.

Lash is not just a formidable improvising bassist but also a composer with a particular interest in post-Cageian music. His group The Set Ensemble, for instance, focuses on works by composers in the  Wandelweiser Group, as well as and Lash’s own compositions in that idiom. But his two pieces evidence none of that – just a keen appreciation of the Convergence group aesthetic.

“Jacket”, the album’s longest cut at 9:42, begins as a delicate duet for piano and muted cornet. Then Lash’s bass bounds in only after 3:25, with crisp but increasingly incendiary drumming by Eisenstadt, sparking suddenly charged pianism from Hawkins and a tumbling propulsive impetus. Another change of pace comes at 7:30, as staccato line breaks are introduced to dampen the pace but do little to dissipate the music’s charge or intensity.

Lash’s “Azalpho” is yet more tightly organised: jaunty, episodic and brief, the quartet hammering home the last of its serial variations.

Taylor Ho Bynum’s sole contribution, “Coyote” (04:00) picks up on the clipped ensemble attack of “Jacket”, though here the effect is jauntier. The album’s first side closes on an almost playful note.

Hawkins’ “Owl” begins side two briskly, with unison figures in serial counterpoint, the group’s momentum gradually fading as each individual line melds and blurs. In the tune’s second half, notwithstanding Bynum’s highlighted cornet soloing, each player is seemingly absorbed, reflecting on eddies in their gently ebbing collective momentum.

On “Mamady Wo Murado Sa”, Eisenstadt’s arrangement of a Gambian traditional, Hawkins highlights rhythmic fragments that he’s picked up amid the brittle abstractions of an opening kit percussion/cornet duo, and his lyricism recalls the gentle folk-spiritualism of South Africa’s Abdullah Ibrahim. And so the album ends, openly, on notes of unclouded transparency.