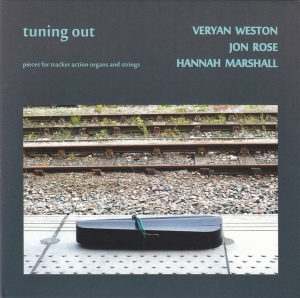 Tuning Out is a double CD of improvised trios for tracker-action organs and strings, recorded in concert in May 2014 during a short tour of English churches.

Keyboard player Veryan Weston, violinist Jon Rose and cellist Hannah Marshall undertook the tour with a notion to “re-imagine the nature of pitch relationships”. Their improvisations explore microtones, unequal temperaments and alternative string tunings. Brief liner notes relate each artist’s thoughts vis-a-vis tuning and the rules of equal temperament, on which I’m in no way qualified to comment.

For most of us, the stars of each gig would probably be the various ‘tracker action’ pipe organs, as played by Weston, but Rose and Marshall are equally dominant in the mix, and the strings are just as carefully attuned to one other as they are re-tuned to each venue’s unique acoustics. Rose and Weston have been partners in alt-tuning experimentation for over a decade, and Marshall, whose 2012 album Tulse Hill explores de-tuned open string improvisations, is evidently fully sympathetic.

Still, what about those organs? With tracker action, the connections between an organ’s keys and pedals and the valves that sound its pipes are mechanical, rather than pneumatic or electrical. This allows precise touch sensitivity: as notes from the tour brochure say: “When each stop is very carefully and slowly pulled while a key is pressed, a myriad of uncertain transitional stages of sound is produced (allowing) a much wider of range of tones than (would) a piano or electric organ.” Mastering these transitions requires physical concentration, so there’s no disconnect between organist and string players on that score.

The album compiles recordings from five concerts; nine pieces in all, sequenced chronologically, with a total playing time of around 155 minutes. None play on the expansive, feel-good piety of church music. After slithering into action on “May 12: Liverpool”, the trio quickly work over a range of techniques and soundings, and their relationships remain nervy and almost febrile. The vibe ranges from becalmed to twitchy, with Weston at one point scattering notes more evocative of a wind-spun Hammond sound than Sunday service. Grounded by stressed rubbed strings, he’s soon piping like an old-school cartoon train while the strings combine in a motion blur.

In the earlier pieces, the trio is still finding its range. Their progression makes for great variety. Where the Liverpool piece is skittish and changeable, the lengthy, dark and forbidding “May 13: York” is more focused but no less volatile. At times it sounds more like Bernard Parmegiani-style electro-acoustic music than anything a string ensemble without organ accompaniment could pull off.

Of three excerpts from Newcastle, “May 15: Newcastle part I” begins as a play of small stress and release sounds, creaking, pinging, and miscellaneous sonic scavenging, but slowly forms drone pulse and offshoots of sound in separate pitches. “Part III” comes closer than anything else here to atonal modernism.

The most sonically concentrated piece on the set, and one of the shortest, “May 16: Sheffield part I” features the most vigorous string playing as the organ creates a phenomenal depth or wall of sound. “Part II” then moves from an adagio passage through amato to percussive espressivo, before the previously dominant strings yield to a coda of spectral organ sounds. On balance, the Sheffield pieces are the most stimulating of the set, with Rose and Marshall freewheeling exultantly on “part III” before engaging Weston in play of tensions. The organist responds with simultaneously vibrant low tones and shimmering upper register harmonics, then ventures into aggressively expressive dynamic extremes – breathtaking stuff.

Rose likens the mechanics of this instrumentation to a “digestive system at work – guts, wind, pipes. Back to animal first principles,” which certainly captures the trio’s more visceral qualities; but he sells the music short; there’s evidently higher consciousness at work here, as when “Sheffield part III” ends with a playfully elastic, pointillist passage of silence-studded staccato gestures.

As good as the earlier performances are, on this evidence the trio grew tighter and played with more authority as the tour progressed. Sheffield sounds like the highlight, but the final date, at All Hallows-on-the-Wall Church in the City of London, yields the longest single extract: “May 19: London” (37:48). It’s less capricious or volatile, but no more less charged than the preceding pieces, but the trio’s playing has subtle shading and morphogenesis now, and this piece features some of weston’s weightiest playing. It’s a darkly atmospheric piece of work. After 34 minutes a baby wails in sympathy with the final organ upswell, and such an irrepressible response seems entirely apposite.

It took me a while to get into, but his is remarkable, deep, enfolding and constantly surprising music.

Buy Tuning Out direct from Emanem.