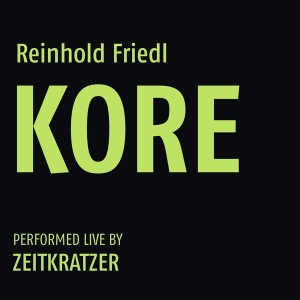 Zeitkratzer (“time scraper” in German) have carved out a unique niche in the contemporary music scene, recording projects inspired, or based on the music of artists as diverse as James Tenney and Whitehouse, bringing noise into the ambit of contemporary ensemble music through collaboration and amplification.

Haino’s involvement was apparently a last minute decision; having heard Zeitkratzer rehearse, he asked if he could join in. This was on the same bill as the scheduled collaboration documented on Zeitkratzer + Keiji Haino: Live At Jahrhunderthalle Bochum – one of the best items in either artist’s discography. On both sets, Haino focuses on his voice.

The first of Stockhausen’s so-called “intuitive music” works, the Aus Den Sieben Tagen pieces are text-based. Having no notation, prescribed tempos, etc., they rely on the performer’s intuition to go beyond practised skills. “I don’t want…something mystical,” Stockhausen once said, “but rather everything completely direct, from concrete experience”*. Some pieces are manifestos, but the five selected for this performance all describe musical processes, states or relationships. Some, however, do reference earlier Stockhausen works. “Intensität”, for example, references “Kontakte”.

Given that Zeitkratzer purportedly strove to interpret Stockhausen’s texts as precisely as possible, perhaps the spontaneity of Haino’s involvement brings things closer to the spirit of the composer’s intent. Or perhaps, since Haino presumably knew the earlier recording, he already had it in mind, and was used to singing along. In the shower maybe. It’s possible.

“Verbindung” is all stresses, creaking and entropy, with Haino mouthing tongue-clicks and other more sympathetically guttural vocal sounds. Double bass and cello test stress points and amass the odd intensity amid much fine and felicitous detail, while individual instruments, notably Hild Sofie Tafjord’s french horn, are spotlit in brief flashes of radiance.

“Nachtmusik” works a similar vein in a larger soundfield, conjuring images of murky industry, mist shrouded sea-cliff, and/or disturbing fantasia – the latter primarily due to Haino’s otherworldly, obfuscatory chuntering; and after such atmospherics the short, Kontakte-referencing “Intensität” comes as a jolt of dramatic abrasion with its percussion stabs, raw blare and brass and vocal yelping.

By far the longest piece, “Setz Die Segel Zur Sonne” (17:07) returns to expand on the slow-burn atmospherics of “Unbegrenzt”. It’s a laminate structure of long-drawn bowing, guttural vocal chants, and a slowly building mass of atonal percussion and churning piano. A stagy theatricality creeps in to the inexorably gathering squall, which climaxes in the sudden light of a cymbal strike.

Haino’s contributions and different stresses within the ensemble’s interpretations of Stockhausen’s texts make this release more than worthwhile, despite the Old School take on the same material (the same pieces, in the same sequence) being so recent. But it’s the companion release that’s essential.

Kore presents a piece by Zeitkratzer’s pianist Reinhold Friedl for heavily amplified instruments. It’s stronger than the ensemble’s previous works in this vein, including the Stockhausen albums, their treatments of Lou reed’s Metal Machine Music, and collaborations with Zbigniew Karkowski and Merzbow, as represented on 2001 album noise \ .​.​. [lärm].

It’s a 54 minute performance, captured live at the 2013 Klub Katarakt festival in Hamburg, sounding clean and vivid on CD. It’s divided into four indexes (“Piece 1”, etc.) for the CD and download editions, but plays continuously.

It builds on Friedl’s previous Xenakis homage, 2007’s Xenakis [a]live!, which Zeitkratzer recorded for Asphodel. Unlike the earlier work, “Kore” references specific Xenakis compositions, namely the tape pieces “Persepolis” and “La Legende d’Er”, but there’s no sense of any deliberation or shape-shifting to fit predetermined contours: “Kore” has both the integrity of a meticulously through-composed piece, plus the moment-to-moment dynamism of collectively improvised music and the electrifying charge of amplification. In its early sages, it resembles, texturally, the music of Æthenor, where art metal rubs up against European improvised and experimental music.

The foundation of “Kore Part 1” is a vast opaque miasma of bass drone scoured by metallic percussion scrapes and and chaffed by resinous, squeaky strings. On “Part 2” the mass is reduced but there’s no appreciable diminution, and there’s an irresistible arc of tension, drawing back to ever greater intensities. The work can only be appreciated as a whole.

The soundfield is expansive, under tension and teeming with detail throughout. Gong sounds and cymbal scrapes cede to white-noise strings scratch-toned or tautly drawn against bridges, the vibratory trilling of harshly blown reeds, murmurations of muted French Horn and trombone, and piano preparations all get caught up in the turmoil of Maurice de Martin’s storm percussion. Despite an overriding, implacable sonic density, the artistry and industry of each instrumentalist is almost always discernible – this isn’t noise music.

Still, by the time “Part 4” rolls around, everyone’s lines are lashed together in the face of a cresting sonic tsunami. When it breaks, only a rarefied, friable corona of burn-off remains. Great stuff.