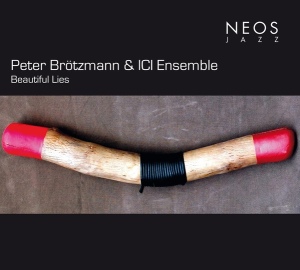 The International Composers and Improvisers (ICI) Ensemble come to Beautiful Lies (NEOS) after past encounters with George Lewis, Olga Neuwirth and William Parker, among others. It’s probably safe to assume that Peter Brötzmann, who composed the music and stars as featured performer, needs no introduction.

Brötzmann big band recordings are relatively few, so Beautiful Lies is quite a coup for NEOS, whose new music catalogue is shaping up nicely (see also my review of the companion release by Brötzmann associate Michael Wertmüller, Terrain! Terrain! Pull Up! Pull Up! – a very different big band session).

Although the ICI Ensemble accommodates him beautifully, Brötzmann is very much a focal presence throughout Beautiful Lies, which was recorded in concert in Munich in February 2014. Every player makes their mark, but he naturally dominates a four-strong reeds section. There’s been the odd complaint on social media that the set isn’t graced by one of Brötzmann’s woodcuts or lithographs, but the object photographed for the cover is one of his, a 2013 sculpture in wood, leather and paint, titled Joystick – a signal, perhaps, that the saxophonist had this date very much under his control.

On other dates, the ensemble has sometimes incorporated more in the way of electronics and processing—co-founder Christofer Varner, for instance, sometimes enhances his trombone with sampling software—but not here. Gunnar Geisse plays laptop and (uncredited, or otherwise sampled) electric guitar, and Georg Janker uses electronics to process his bass; but otherwise it’s the mixed reeds that dominate. There’s no brass section as such, just trombone and bass trombone besides the laptop, the rhythm section and Martin Wolfrum’s piano.

On albums by Brötzmann’s Chicago Tentet, the leader’s charts were invariably the most challenging for the listener, being doggedly non-idiomatic, without recourse or reference to any context broader than free music. No matter how often I play his “Foolish Infinity” or “Burning Spirit” from 1 / 2 / 3, for example, the follow-on pieces by Mats Gustafsson and Ken Vandermark always seem like landfall.

Both of those compositions ran to half an hour, and so does the first piece here, “Beauty Doesn’t Lie”. The other, “Auge des Betrachters”, is ten minutes longer. Take a deep breath …

“Beauty Doesn’t Lie” begins with the four reeds in conference, the rest of the ensemble easing themselves in, and we’re soon in recognisable Brötzmannian terrain. The piano introduces chinks of flinty light, and the reed-mesh is airier than the brass domination that’s common with big bands. Processed electric guitar pecks at the interstices, opening up a space for a dialogue with Roger Jannotta’s flute. But there’s only one locus here, and that’s Brötzmann, who dominates the reeds and leads their re-imposition of dominance over the ever more abstract electronic textures.

There’s then a tinderbox stretch of free play, and a lovely, atmospheric interlude for piano with preparations, flute and clarinet, which assumes the tranquility of a chamber piece (mood-wise, something akin to Messiaen’s “Quatuor pour la fin du temps”), and there’s also a quiet space for muted, snorting and snuffling trombone. It’s the drummer who marshals a second free-for all, over which Brötzmann casts a sour drizzle, and then the introduction of piano that signals another shift into a space for pianist Daniel Brylewski to break, setting the space for a slow-paced, slightly sleazy finale, the leader now tenderly warm of tone. On first playback it’s Brötzmann’s more trenchant and pugnacious moments that stand out, but he actually covers a wide expressive range.

It’s hard to tell which reed is Brötzmann’s when “Auge des Betrachters” begins. It’s certainly his tenor that holds the line against disruptive, beat-boxy processed percussion; one of the other reeds then set against Georg Janker’s assertive bass. The performance then settles into an edgy trade in partnerships, with the brass dominant, and live-processed sound and flute shards aglint in the mix. Inevitably, perhaps, it’s Brötzmann who goads things back to intensity, and then shepherds the ensemble through a white water passage buoyed by forceful contrabass bowing and rolling percussion. And that’s just the first twenty minutes.

There’s then a long passage for the ensemble’s reeds against resourceful pianism, spilling into a flintier exchange between the now dominant piano, bass, skittish percussion and muted brass. Brylewski then goes under the piano’s lid when the reeds start pecking away, the expected upswing resolved instead by a calmando passage, contemplative rumination sustained even when two reeds flurry in disputation, but then darkened by chordal piano. Pent-up aggression finally spills out in a welter of the concentrated vehemence, a vast contrabass drone providing stability for a calmer run in to a slow-mo climax, through which Brötzmann weaves variations on a gorgeous melody that reminds me of “Nature Boy”.

This a more approachable set than those heavyweight Tentet recordings. Brötzmann manages to braid his trademark blare and machismo with the ensemble’s nuanced textures in ways that remind us how emotionally tender and reflective he sometimes is in solo performances.