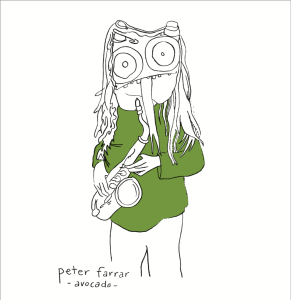 Avocado is one of two dispatches from Sydney’s Splitrec label – recordings by two artists operating on Australia’s south east coast. It’s by Peter Farrar, a saxophonist and habitué of Sydney’s “experimental, improvised, Jazz, Ethiopian and style-free music communities”. The other, reviewed here, is by Dale Gorfinkel, a communitarian multi-instrumentalist and installation artist based in Melbourne. Both are very different.

Where Gorfinkel’s Switches & Hose documents four individual site- and context-specific performance events, Farrar, who plays alto sax with various extensions (“mainly plastic bags and bottles as mutes”), culled the pieces on Avocado from hours of tapes from months of cloistered recording at a Sydney rehearsal studio.

The long title track, “Avocado” (15:20) is even more raw and vocal sounding. You can hear the buzz of plastics against forced air and wooden reed vibrations, and the occasional surge of round, resonant bell sounds. But the performance itself doesn’t sound forced; there’s definitely a sense of patient, analytical progression as Farrar constantly pauses, briefly, to rethink and re-calibrate, then draws out the most extraordinary sounds into coarse, multi-ply textures.

I haven’t heard saxophonics like this before. John Butcher is obviously a kindred spirit, but Farrar’s conception is equally uniquely distinctive.

“Green Stripes” is another long one at 12:51. Its effects are curious, and curiously gentle, as high-pitch metallic drones mingle with forced air that bubbles, riffling, through pursed lips over plastic, the ambient shuffling sound of rain also blending in. Some of those high pitches take on a luminous, quasi-electronic quality that contrasts beautifully with those that are more obviously man-blown and key-suppressed. The short, concluding “White” (3:30) plays slightly more open-throated variations on a similar theme.

Farrar’s extruded sonic canvasses have a harsh but undeniable beauty, and striking ideational clarity. Anyone with a taste for creative saxophony should check them out.