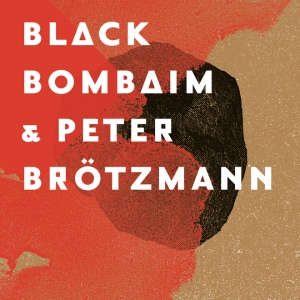 Portuguese heavy psych trio Black Bombaim have made previous road noise with fellow travellers of both hard rock and improv stripes, recording 2015’s Live at Casazul with Portuguese saxophonist Rodrigo Amado and Golden Void guitarist Isaiah Mitchell. You’d think one-time Stooges saxophonist Steve Mackay, who plays on one side of 2012’s double vinyl Titans, would’ve proved their ideal match, but this new session with German sax titan Peter Brötzmann, on Shhpuma—also recorded live, but in relative luxury, in a Porto recording studio—is the one that really puts down a marker.

Brötzmann fans should note immediately that although Black Bombaim evidently thrive on collaboration and improvisation – their 2012 Gnod collaboration Black Gnod was fully improvised – this isn’t a free jazz session along the lines of Last Exit, Hairy Bones or Full Blast; not even avant-improvisatory noise of the kind Brötzmann cooks up with Keiji Haino or Fushitsusha, much less the Sun Ra-/AEC-inspired improvisations he conducts with Istanbul’s Konstrukt (cf. Eklisia Sunday).

Black Bombaim play heavy psychedelic rock with the fuggy intensity of stoner metal, and Brötzmann simply blows over the top – just as he blows over the top of Heather Leigh Murray’s autoharp on their duos, but with rather more success.

Where Brötzmann’s playing and Murray’s steely slides and elisions run in parallel and never really meld, there’s such a bodily ebb-and-flow dynamic to Black Bombaim’s music that the saxophonist’s sound gets folded into the group sound, like a converging flow in a weather system.

The CD sleeve lists four pieces, “Part I” to “Part IV”, but there are actually five.

Brötzmann gets “Part I” underway with a drizzly, blues-inflected solo, unaccompanied for two minutes before the tide of Black Bombain washes in then recedes – a heartbeat pause before they kick back in with a propulsive backbeats, driven and directional, with melodic, seductive highline guitar prefiguring peals of psychedelic filigree. Brötzmann’s free to do what he likes, but group and soloist track each others contours, and the saxophonist rides the thermals.

As heavy psych goes this is accessible and melodic, having something of Ethan Miller’s more melodic sensibility – more of a jam than Howlin’ Rain, but without the excess and rough edges of Comets on Fire – closer to Wooden Shjips in it’s motorik drive.

“Part II” is both more purposeful and just a shade looser, powered along by a churning bassline. The group is constantly recalibrating though, drawing back from fuzzy-edged excess, keeping their shape, accommodating and allowing Brötzmann to vary his attack. He takes what is effectively a fine, lyrical solo to bass and drums accompaniment, then rips out a series of his trademark throaty lung-bursts behind Ricardo Miranda’s distortion-laced lead guitar.

“Part III” – the longest cut at 11:32 – is slower and sparser, with a ‘tribal’ drum rhythm and Brötzmann in fine throat, creating a real tension between tumbling, free-flow percussion, his own very vocal rawness, and the wire-drawn-tight play of Miranda’s lead guitar.

“Part IV” is anchored by a chewy Geezer Butler-style bass line – the Black Sabbath blueprint developed into a thrumming workout with pile-driven intensity, with hints of abandon entering into the playing of both Brötzmann and Miranda. Tojo Rodrigues bass carries the melodic charge, as well as maintaining the directional driving force at the heart of Paulo Gonçalves unquenchable rhythm track.

The un-flagged final cut is marginally the album’s shortest (6:58) track and and most concise, initially propelled by limber backbeats, and with Brötzmann in a higher, more melodic register, then shifting gear to canter into a climax of modulated rolling thunder.

Black Bombaim never lose their sense of shape or proportion in the music, keeping everything perfectly tight but loose, and there’s never any sense of mismatch with Brötzmann. On the contrary, the quartet seem made for each other, the give-and-take seems effortless, and the sax man has as much freedom here as anywhere, putting in a top-notch performance.