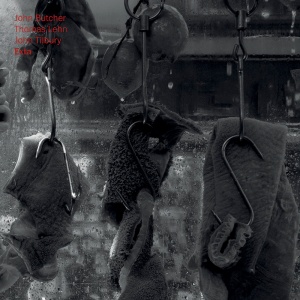 In ancient Roman ritual, exta were the organs of a sacrificial animal: its lungs (pulmones), heart (cor), liver (iecur) and gall bladder (fel).

On the seventh album on the fast-maturing Fataka label, John Butcher (saxophones), Thomas Lehn (synthesizers), and John Tilbury (piano) offer up five pieces neatly excised from just one day of improvising in a London studio, each titled for an exta.

The Romans offered exta to the gods, and then divined them for signs and portents. Perhaps Exta‘s naming invites us to interpret the pathology of this music, its mechanisms of development, structural morphology, and causes and consequences of its changes.

That might be worthwhile: Butcher, Lehn and Tilbury are the most perceptive, refined and consistently rewarding of musicians, all supremely adaptable (see the various concert reviews linked below), and all as likely to confound as to satisfy an expectant but insufficiently openminded listener.

Lehn favours a Synthi A, a modular analogue synthesizer played using touch-sensitive pins to ‘patch-in’ a matrix of infinitely variable connections. Since reproducing an exact patch can be next to impossible, most artists approach its playing as a dark art, as much a channeling of spirits as an embrace of Cageian chance operations; but Lehn always seems certain in his decision-making, and always in control of his output: sounds ranging from synesthetic wave forms to dry, percussive contact glitches.

Like Lehn, John Butcher has an intimate rapport with his instrument and plays with a total lack of sentimentality. He knows its rich history for sure, and that’s (selectively) bound up in his playing (I hear traces, here, of Steve Lacy and latter-day Evan Parker), but he’s deconstructed the inheritance of technique and started anew, with a fresh conception of approach, finding fresh ways to sound a saxophone.

Tilbury, likewise, begins with a firm grasp of ‘conventional’ technique, embraces the potentialities of unorthodox soundings and preparations, and goes further, using subtle amplification and sound processing to potentially radical transformative effect. On this date, that extends to percussion duties, with Tilbury transforming discreet elements of his piano into idiophones, sounding gong tones from preparations and tamped harp strikes.

It’s a close thing, but among this trio of music’s most sensitively attuned players, Tilbury seems the most selfless: those moments when his keys incise boldly are few, and all the more effective for it. More often, it’s hard to tease his contributions apart from Lehn’s. Butcher can, and frequently does also play within the predominantly analogue/electronic grain of this music, but he’s always the most likely of this company to subvert expectation, and he’s characteristically ideationally restless.

On each of Exta‘s two longest pieces, “Cor” and “lecur”, each of which retains the contour of a complete performance piece, Butcher reacts against encroaching stasis with interjections of fluent and relatively orthodox saxophony. More often, he plays in forced attenuations or stertorous flutters.

The overall mood is dark and caliginous, a brooding obscurity within which sounds swell, slither, flicker… And yet abstractions are balanced by moments of purely musical refinement: witness Tilbury’s minimalist progressions near the end of “Cor”, or the way Butcher’s sax sounds momentarily fade from piping to flute-like on “Pulmo II”. At the centre of the same piece, Lehn evokes subterranean echoes of industrial/mechanical rhythm.

This gloriously unhurried, constantly shifting music—each dynamic stimulus tempered by currents of textural stasis, notably on the initial stretch of “lecur”—resists summation. It is an enthralling, exemplary piece of work.