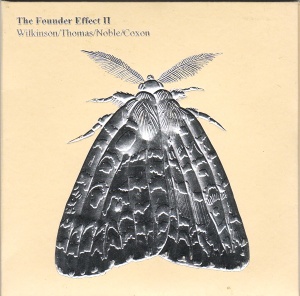 John Coxon is a vital presence on London’s music scene. He founded the drum and bass-turned-improv locus Spring Heel Jack alongside partner Ashley Wales, moonlights with Spiritualized, and plays in The About Group, with Pat Thomas, Charles Hayward, and Hot Chip’s Alexis Taylor. Yet, at the launch concert for the Foundation Effect trilogy, held at London’s Cafe Oto on 10 July 2013, Coxon told me that, of all the groups he’s involved in, he enjoys playing in this one best of all.

Coxon’s Treader label continues the work of Spring Heel Jack’s noughties transatlantic improv summits, which were convened in association with Matthew Shipp and recorded for the Thirsty Ear label. In those sessions, the electronic trio forged new genre cross-pollinations with players of the caliber of Evan Parker, J Spaceman, William Parker and Han Bennink.

The Treader catalogue is more focused on bare bones improv, and where Thirsty Ear was a relatively slick project, Treader releases are all stamped with Coxon’s distinctly uncooked production and performance values. The label has a boutique, homespun aesthetic, its releases uniformly packaged in card sleeves, each boldly embossed with creature designs.

Each Founder Effect album is adorned by a different moth; fitting choices for such a metamorphic entity (although, in population genetics, the founder effect is the loss of genetic variation that occurs when a new population is established by a very small number of individuals; so there are subtler connotations).

Volume III, subtitled The Both, is given to a Thomas/Noble duet. Volumes I and II involve the full group, but ring the changes in instrumentation. The former features Coxon on electric guitar and Thomas on synthesizer; on the latter, Coxon switches to synth, and Thomas, for the bulk of the set, to piano. On each disc, Wilkinson alternates between alto and baritone horns. Each of the five performances across these two sets has its distinctive feel, so each disc complements the other.

The Thomas/Noble duet on The Both is an occasionally tempestuous but always intelligently modulated exchange, conducted over six pieces of varying character. As with the other volumes, there’s a raw immediacy to the players’ interactions, superbly captured by a vérité recording production style.

The duo are superbly matched, their synergy vital to the Founder Effect. Their power and vivacity matches the bar-setting precedent for this format, Cecil Taylor and Tony Oxley’s date in Berlin in 1988 (Leaf Palm Hand (FMP)), although their conception for The Both is both less imperious and more concise.

Encounters in this format are few, so it’s great to have this set so soon after the recent (very different) offering from Alexander Hawkins & Louis Moholo-Moholo.

Volume I has two long pieces, “Weight” and “Sharpen”, and “Weight” is certainly the heavier of the two. It kicks off with a cold, hard draught of fierce intensity. The impetus then splinters for a few agitated minutes, before a baleful mood sets in, brightened only by liquid synth. As the quartet explores exit strategies, they experiment with some uniquely discombobulating sounds, shading into a babel of emergency when Noble whips up a percussive vortex. The performance ends in a mood of insurgent urgency.

“Sharpen” is even better. It begins as a rawly woozy, urban ballad, but slips into a state of agitation and instability, all straining at leashes, threatening conflagration. What actually follows is far more subtle and satisfying. Coxon plays surprisingly clear and delicate figures, the beauty of which stops everyone but Thomas in their tracks. The synthesist summons a torrent of lavalike electricity, and soon Noble pitches in, their impetus carrying Coxon on a torrent of rhythm energy. When he’s washed up, he returns to those licks, and duets with Wilkinson in a bluesy dialogue that leads to a reprise of the opening powerplay.

On “Marsh”, Wilkinson’s sax is the most muscular presence, Thomas’ piano a centrifugal force, Coxon’s synth a capricious arbiter of mood, and Noble’s percussion a source of agitation. Piano and sax shuffle occasionally melancholic inspirations, which their cohorts proceed to distort and animate, the united quartet then combining in darkling manoeuvres. Where volume I will satisfy improv fans with its creative intensity, volume II takes the listener furthest from the familiar.

“Coxhill” is five rounded minutes of puckish volatility, constructed around Thomas’ and Noble’s curt exchange of bold percussives, after which “Chicai” finds the Founder Effect at its most abstract and unclassifiable. Both Coxon and Thomas are now on synth, the latter delving only briefly inside the piano.

The mood, at first, is one of brooding restraint and suppressed, irruptive energy. Unsurprisingly, the channelling of that energy takes an unexpected course. For a while, the players’ interactions become playfully, scabrously rodential. Coxon’s synth then takes on a firmer, bass-rich funk inflection. When Thomas responds, there’s no second guessing how things will develop; the possibilities are endless.