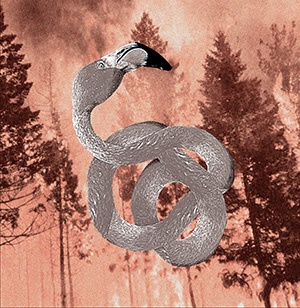 The website for Trestle Records, which Adam Coney co-runs, portrays him as: “a guitarist with progressive sensibilities….influenced by the intimacy and restraint of classic jazz and folk recordings,” which seems about right on this evidence. There are also shades here of the progressive rock Coney explores more overtly with Morviscous; this in addition to various other projects including Calibos, Acland & Sydney (“taking cues from John Fahey’s Revenant mandate”), City Shepherd (“re-contextualised blues and roots music”), and Noon (“strictly improvised”), all under the Trestle umbrella.

Calibos, by Coney and Jonny Fryer, was one of last year’s most delightful and low-key surprises.  The duo reunite for just one song on Coney’s solo debut, The Fall of the Flamingo Gardens, its opening cut, “Leylandi”. Here they mesh needling, cyclical guitar figures with looping double-bass bowing and piano ostinatos over cheap beats and hi-hat. It’s unlike anything on Calibos, and unlike anything else on The Fall of the Flamingo Gardens, which explores various modes before settling into its dominant reflective vibe.

The second piece, “Harvest of Tongues”, is the real odd one out. Just 01:48 and conspicuously aggressive, it pits punchy contrabass courtesy of Morviscous’ Peter Bennie against atypical electric guitar licks a la Sonny Sharrock from Coney. “Law of LaPlace” re-unites the duo with Coney on acoustic, and is much more satisfyingly sui generis, being far richer in subtleties of both tone and texture. Both Coney and Bennie play double bass on “By Rural Carvers”, one bass bowed gravidly with feeling, the other roughing out lo-fi ‘beats’.

Elsewhere, guest musicians occasionally contribute. Bennie plays bass on four of the album’s eleven pieces, and there’s snare drum and cymbal on two others; “Wine Song”, dedicated to Robbie Basho, pairs Coney with second guitarist Nick Siddall. Only the aforementioned “Leylandi” and “Taciturn AM” feature as many as three players: the latter has Dean Valentine Smith’s brushed snare and Christian Berg’s mostly subdued sax shading Coney’s guitar’s languid meander with blue jazz. “Where are the Lights” loses the sax, but has Coney accompany himself and Smith on violin for a gorgeously solipsistic pastoral.

Only three pieces—”Don Connection”, “Greater 83” and “Fly By (Instrumental)”—feature Coney solo, albeit multi-tracked. “Don Connection” is the album’s choice cut: jauntily ambitious, it has Coney playing both acoustic and semi-acoustic, in addition to violin and sampled percussion. As with the majority of the tracks here, “Don Connection” is hard to pigeonhole; stylistically indebted to no-one particularly obvious, yet by no means self-consciously avant-anything. It is, however, the one piece here for which a specific influence has been acknowledged, with Coney tipping the hat to Jim O’Rourke via the website.

Lo-fi beats and modified sleigh-bell samples form a rhythm track on “Greater 83”, where they mirror the dextrous charm of Coney’s guitar playing – simple but effective patterns enlivened by judicious application of extended techniques yielding textural riches. Echoes of Laurel Canyon in “Fly By (Instrumental)” sweeten the pastoral nostalgia of one of the album’s most straightforwardly pretty melodies; its closest competitor in that regard being the album’s last piece,”Lights Return”, a rather melancholic duet played out on  off-key upright pianos.

Buy The Fall of the Flamingo Gardens direct from Trestle Records.